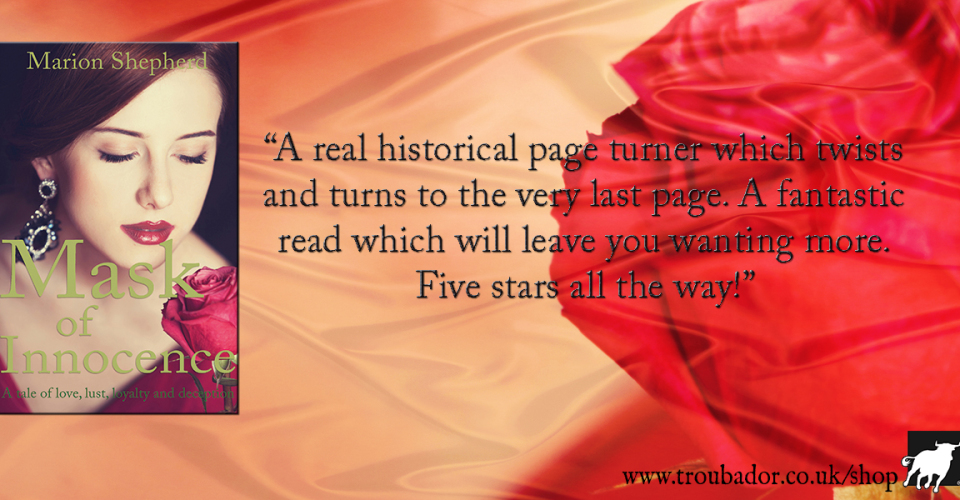 Mask of Innocence  5 star historical romance with a twist

Mask of Innocence -  By Marion Shepherd – Ebook out now

From the green hills of Gloucestershire to the brothels of Victorian Bristol and the fens of Cumbria, Mask of Innocence is a pacey novel about dark family secrets and tragedy, manipulation, abduction and murder all set in a rich backdrop of Victorian society.

The Marchant family live in a majestic Tudor manor house, Cedar Grove, Dunnmarston, which is nestled within the verdant and rolling Cotswolds hills.

The young, naïve and beautiful Francesca Marchant, who has a rebellious and unconventional spirit, returns home from finishing school to attend the funeral of her tyrannical father. She is then launched into a world of intrigue and dark desires. Francesca is despised by her stepmother, Catherine and pursued by the obsessive and dangerous Rufus Donaldson - together they conspire to abduct Francesca and force her into an unwanted marriage jeopardising her future with the man to whom she has given her heart.

Francesca’s twin brother Richard is the new Squire of Dunnmarston. He is a handsome and lustful youth, who lacks the confidence to take on the responsibility of running the estate.

Bullied by his father and forced into marriage to the virginal and sheltered Isobel James. Richard is manipulated and seduced by Catherine and as family secrets come to light, can he escape his dark desires and rise above them to become a better man than his father?

Marion lives in the beautiful city of Worcester